Happy Anniversary to Us

Three years ago today, give or take a few hours, I married this guy:


I was the last to know that we would end up getting married, apparently. After our second or third date I mentioned to a good friend who would end up being or maid of honor that I'd gone out with ﻿someone a few times. "You are going to marry him, I know it!," she said. "You sound like you might actually like him."

Almost seven years later we got married. Why the lack of rush? If it's the right person after year one they will still be the right person after year seven. We had grad schools to go to, new jobs to get,  houses to buy. It all worked out in the end. Our mutual love of books (except some of the absolutely boring things Bill is reading for his PhD program), playing outside, running, Halloween, beer and not sitting still helped get us here.

Bill puts up with my shit without being a pushover. Plus he makes me coffee in the morning and only gets me lost in the woods during adventure races some of the time. What's not to love? ﻿

We tried to not make it to three years, first by playing in traffic the day we got married and then by getting stuck in a riot the night the Phillies won the World Series. Fortunately we survived. 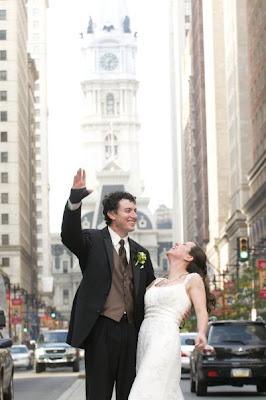 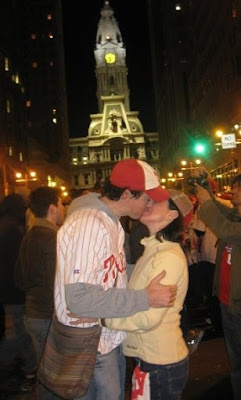 About 10 minutes after this picture was taken people started flipping over cars, breaking into stores, lighting stuff on fire. Very romantic. Almost as romantic as the time our cat got stuck in our chimney and the time we were in an adventure race, stuck in a swamp with dead birds floating around. ﻿
﻿
So far, so good. Happy anniversary, Chief!

Bill didn't believe me when I told him that his smartass wife would put up an anniversary post.

And he meant smartass in the best possible way :)

Well you did and now he is on the internet in all his glory! :-) Happy anniversary!